Tropes are everywhere these days! Even though not everyone loves them, some are just really fun to read. And so, in honor of Valentine’s Day, I’ve decided to make a post listing 7 romance tropes you either love or hate! I thought it would be a fun post to do, so… Let’s do this! 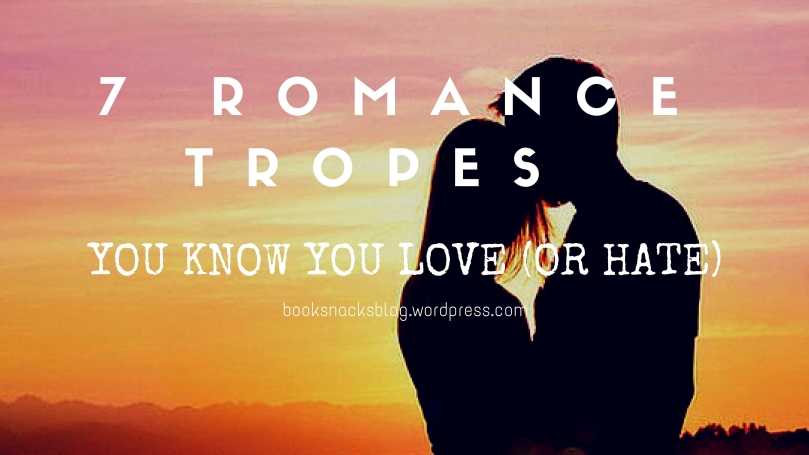 Now, this one is definitely one of the reasons I felt compelled to add ‘hate’ to the title here. I know a lot of people hate this one—though to be honest (for some this may not be anything new) love triangles don’t bother me as much as some other people. ‘Cause well-written love triangles are actually really good! *cough* The Infernal Devices *cough*  They can bring out so many emotions, and also contribute to character development so.. #I’mhappy But I’ll be the first to admit that love triangles that are poorly written are definitely not something to like! But when they are…

Now, I’m not sure where exactly this falls into; it has both its lovers and haters, as most everything in this world! I find this often in fantasy, paranormal or dystopian/sci-fi novels, but it has a presence in contemporary novels too. I don’t mind this trope that much, although it definitely depends on the actual execution and the story. You know the type; even if the two characters are in love with eachother, there’s something that’s preventing them from actually being together. Often times I see this alongside a love triangle; one of the love interests are ‘forbidden’ if you know what I mean.

Sound familiar? You bet it does. The trope of insta-love is well known.. although not that well-received by readers. And I can totally understand that! Insta-love is just so hard to relate to sometimes, and us readers being the cynical and sour lemon (not that there’s anything wrong with that) it’s not that believable either. Often times this is a trope that cause people to disregard romance in a book, which is unfortunate, but it does have its fans—after all, if it didn’t, why would authors continue to use it so much?

I think this is definitely one of the most-loved tropes..? Maybe? It could be just me, but this trope is really popular—and I totally see why! It’s one of my favourite tropes too, no matter how many times I read it. Reading a story where a pair of close friends fall in love is just so sweet and heart-warming! It’s kind of hard to resist that charm. Not that most people want to, right?

The player/bad boy trope is one I’ve seen often (or so it seems), whether it be a romance novel, a fantasy novel, or a paranormal. The main male character is labelled as a ‘player’, and has a reputation for playing the field, seeking relationships usually without much emotional attachment other than lust, until he meets his one true love. You can’t deny hearing this one before, it’s must’ve been in at least ONE of the books you’ve read!

I actually haven’t seen much of these, but it’s a trope that I admittedly love, or at least usually enjoy. The idea of it is just so much fun (though in essence maybe it’s not the best written trope) and I found myself enjoying the previous books I’ve read with this trope quite a bit (To All the Boys I’ve Loved Before, All I’ve Never Wanted). Basically one of the characters (usually the female character) take another character to pose as their boyfriend, for some given reason. It sounds kind of ridiculous? But I assure you, it’s fun to read, and totally swoony! (Even though swoony is not a word, shhhhh. It is now.)

Generally this goes for older siblings? The protagonist has a crush on his/her friend’s older brother/sister, usually some family/friend thing that prevents them from getting together, etc etc. You know how it goes. I’ve seen this pretty often, I have to say, and most times I believe I enjoy it! Sometimes though it comes off as extra cliché and becomes annoying to read about, but there are definitely times where it’s very well done (and not, you know, creepy or weird or something).

Aaaaaaaaand that’s a wrap! 7 romance tropes that you either love or hate, in honor of the upcoming Valentine’s Day! Be sure to let me know down below: which one is YOUR favourite trope? Which ones do you hate? What other tropes do you love? Let me know in the comments!