Rose loves Dimitri, Dimitri might love Tasha, and Mason would die to be with Rose…

It’s winter break at St. Vladimir’s, but Rose is feeling anything but festive. A massive Strigoi attack has put the school on high alert, and now the Academy’s crawling with Guardians—including Rose’s hard-hitting mother, Janine Hathaway. And if hand-to-hand combat with her mom wasn’t bad enough, Rose’s tutor Dimitri has his eye on someone else, her friend Mason’s got a huge crush on her, and Rose keeps getting stuck in Lissa’s head while she’s making out with her boyfriend, Christian! The Strigoi are closing in, and the Academy’s not taking any risks… This year, St. Vlad’s annual holiday ski trip is mandatory.

But the glittering winter landscape and the posh Idaho resort only create the illusion of safety. When three friends run away in an offensive move against the deadly Strigoi, Rose must join forces with Christian to rescue them. But heroism rarely comes without a price…

Hey there! It’s been a while since I’ve done my Vampire Academy review, and I want to continue with doing reviews for the rest of the series. So, I’m here with a review on the second book of the series, Frostbite! 🙂 And to be clear, I enjoyed Frostbite more than Vampire Academy, although they have the same rating. Both books are awesome, and I definitely recommend them.

Just a little note: Frostbite, like the other books in the Vampire Academy has a couple of different covers. The first cover below is the featured one for this review, but the second picture with the covers are the different covers you might see. Just a little observation! 😉

Press the images for a more clear view. 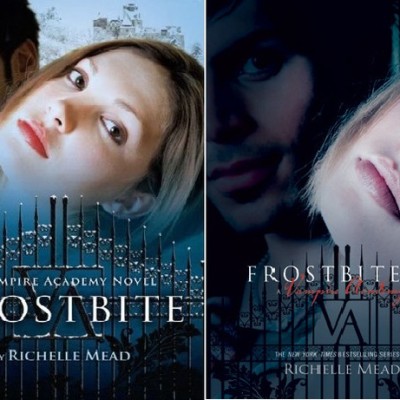 END_OF_DOCUMENT_TOKEN_TO_BE_REPLACED

St. Vladimir’s Academy isn’t just any boarding school—it’s a hidden place where vampires are educated in the ways of magic and half-human teens train to protect them. Rose Hathaway is a Dhampir, a bodyguard for her best friend Lissa, a Moroi Vampire Princess. They’ve been on the run, but now they’re being dragged back to St. Vladimir’s—the very place where they’re most in danger. . . .

Rose and Lissa become enmeshed in forbidden romance, the Academy’s ruthless social scene, and unspeakable nighttime rituals. But they must be careful lest the Strigoi—the world’s fiercest and most dangerous vampires—make Lissa one of them forever.

Vampire Academy was an awesome read, and it was very hard to decide on an adequate rating, however I think Vampire Academy is well deserving of 4 stars, and ultimately, one of my top-picks.

END_OF_DOCUMENT_TOKEN_TO_BE_REPLACED

In a time when Shadowhunters are barely winning the fight against the forces of darkness, one battle will change the course of history forever. Welcome to the Infernal Devices trilogy, a stunning and dangerous prequel to the New York Times bestselling Mortal Instruments series.

The year is 1878. Tessa Gray descends into London’s dark supernatural underworld in search of her missing brother. She soon discovers that her only allies are the demon-slaying Shadowhunters—including Will and Jem, the mysterious boys she is attracted to. Soon they find themselves up against the Pandemonium Club, a secret organization of vampires, demons, warlocks, and humans. Equipped with a magical army of unstoppable clockwork creatures, the Club is out to rule the British Empire, and only Tessa and her allies can stop them…

This one was a tough pick for rating between 4.5 and 5. I’m not a big giver of 5 stars, so I had to really think about this one. And it was a hard choice, but my rating would go to 4.5 stars. That’s not to say that it was a bad story, it was amazing. Totally on my all-time faves. 🙂

So, I read The Mortal Instruments series before reading this book, and just, wow. I was blown away. I really enjoyed The Mortal Instruments series, but Clockwork Angel just blew that out of the window. It was everything in TMI, and much more. I love the Shadowhunter world, so anything with that kind of stuff if already on the pros of a book. Unless the world-building was really bad, which it wasn’t in this case, which made the book so much the better. The setting for this story was also really good, and I feel Cassandra Clare captured the Victorian London Era thing nicely. The characters were very well-developed, and were always for a purpose, not just there to be a comic relief, or filling in space. Upon reading the synopsis, some people may be skeptical; there’s the classic love triangle, a girl who doesn’t know his/her powers, and other similar plot lines. But Cassandra Clare’s unique way of telling a story really turns that all around.