Hi everyone! Does anyone happen to have some chocolate on hand? Because we must celebrate!! Why, you ask? THIS BOOK, is why. (!!!!!!!!!—yes, let us put ALL the exclamation points) This book is so amazingly amazing and I’m asking myself why I waited so long to read it??! So many people have been screeching in my ear to read this, and I’m so thankful I finally did!! If I had missed out on this book… I don’t even want to think about that because it would be too terrible.

A Darker Shade of Magic by V.E. Schwab

Kell is one of the last Travelers—rare magicians who choose a parallel universe to visit.

Grey London is dirty, boring, lacks magic, ruled by mad King George. Red London is where life and magic are revered, and the Maresh Dynasty presides over a flourishing empire. White London is ruled by whoever has murdered their way to the throne. People fight to control magic, and the magic fights back, draining the city to its very bones. Once there was Black London—but no one speaks of that now.

Officially, Kell is the Red Traveler, personal ambassador and adopted Prince of Red London, carrying the monthly correspondences between royals of each London. Unofficially, Kell smuggles for those willing to pay for even a glimpse of a world they’ll never see. This dangerous hobby sets him up for accidental treason. Fleeing into Grey London, Kell runs afoul of Delilah Bard, a cut-purse with lofty aspirations. She robs him, saves him from a dangerous enemy, then forces him to another world for her ‘proper adventure’.

But perilous magic is afoot, and treachery lurks at every turn. To save all of the worlds, Kell and Lila will first need to stay alive—trickier than they hoped.

Erm, I might have to warn you here; I probably will not make any sense whatsoever—but then again, what else is new, right?? I don’t even know how to form proper words right now, ahem. So I’m going to be a list-but-not-really-type review–and hope it makes sense. Here we go! 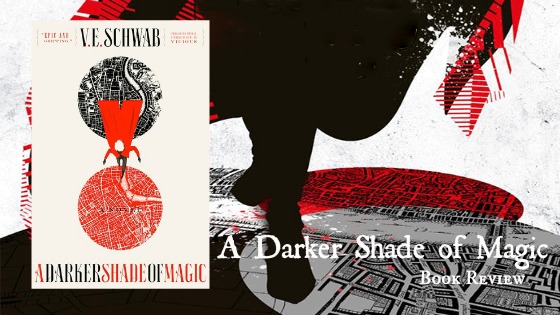 Reasons why you should read ADSOM

This book is completely worth your time and commitment, I tell you. The hype around this one most definitely did not disappoint (for me, at least) and I’m 98% sure that most people would agree with me when I say this book is amazing. Great writing, great world, lots of stabbing, amazing characters and lots of sass–what more could you ask for, am I right? So better go gobble this up soon if you haven’t already! 😉

Umm, I think that’s it?? Basically, I loved this book. It was just so good. (Again, we must get chocolate to celebrate this amazing novel!) It had so many amazing components to it that I loved, and I definitely recommend this for anyone looking for a fantasy novel with great world-building and amazing writing (and everything else, really)!

I’m kind of sad I didn’t read this sooner, but I’m kind of glad because now I have the chance to go straight away to A Gathering of Shadows! I would’ve started it already, but I wanted to write up my review of the first book before I read it, so now that I’ve done that, I will most definitely be continuing with AGOS. So excited!

Alright, now tell me what YOU think! Have you read this book? What did you love? What did you dislike? Am I the only one who liked the stabbing? XD And I sure hope I’m not the only one who took time warming up to Lila, aha. Oh, and would anyone like to give me a magical multi-sided coat? Seriously, someone needs to make this happen. I’d totally buy one. If you haven’t read this book yet, let me know what you think! Do you plan on reading it? What are you looking forward to the most? Is there other London-obsessed people out there? (If so, you should definitely read this book. Just sayin’.) Leave your thoughts below, I’d love to chat! ❤