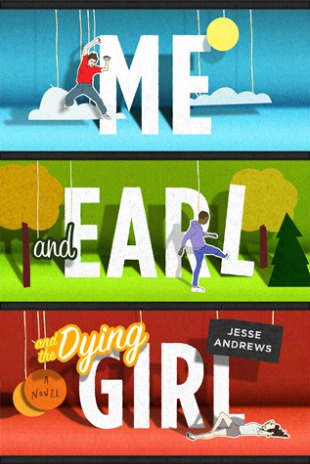 Me and Earl and the Dying Girl by Jesse Andrews

Greg Gaines is the last master of high school espionage, able to disappear at will into any social environment. He has only one friend, Earl, and together they spend their time making movies, their own incomprehensible versions of Coppola and Herzog cult classics.

Until Greg’s mother forces him to rekindle his childhood friendship with Rachel.

Rachel has been diagnosed with leukemia—-cue extreme adolescent awkwardness—-but a parental mandate has been issued and must be obeyed. When Rachel stops treatment, Greg and Earl decide the thing to do is to make a film for her, which turns into the Worst Film Ever Made and becomes a turning point in each of their lives.

And all at once Greg must abandon invisibility and stand in the spotlight.

Hi! Welcome back to another book review, on, Me and Earl and the Dying Girl by Jesse Andrews! I know some of you have waited on this review for a while, so I’m glad to finally have this posted—and to finally let out my frustrations on this book, since, as you can see, I wasn’t the biggest fan of this book. Though I can understand why so many others have loved this book, it just wasn’t for me.

This book, I felt, had no real purpose to the whole story. I mean, it kind of has a semblance of a plot, but really, it didn’t feel like one, to me. I mean, there are some books I find, that can really pull off the plot-with-not-a-big-focus thing. Not often, but it’s possible. This book, however just didn’t do it. I didn’t find any big thing in the plot that kept me entertained or compelled to read more. Kind of harsh, maybe, but true. For me, anyway. A lot of the time I felt I continued reading simply for the sake of finishing it instead of for something more. The fact that I hardly DNF books also played a factor. However without those two things, I might’ve quit reading much sooner. I just couldn’t find myself interested in the plot. It had the potential to be really good, but I think it just fell flat and was poorly executed.

I couldn’t care less about most of the characters in this novel. I’m just going to put that out there right away, because that’s pretty much the gist of my feelings on the characters. Not only did the main character, Greg, not go through any development throughout the novel, but he also really bothered me with his insensitivity to Rachel’s situation. The girl is dying, for goodness sake, can’t you come up with at least some kind of genuine emotion? I was very happy when Earl called him out on this. However, that all being said, one thing I did kind of like was his self-deprecating personality; at least he’s not completely oblivious to what an idiot and jerk he is.

Moving on to Earl. With basically the whole book revolving around Greg, there wasn’t much space for Earl, to be honest, and although I wasn’t his biggest fan, I more or less liked him more than Greg. I actually don’t even know. On one hand I suppose I can understand why he acts the way he does, but on the other hand it really bothered me sometimes, with his whole dirty humour and all. I know this is probably how most teenage boys act, but come on. It got really tiring afterwards.

Rachel, to be honest, was not much better.  I feel like the most there is to her is that she’s dying. Period. I didn’t find anything in her that truly stood out, which was a bummer. I am actually struggling to come up with more to say about her, since there isn’t really much to say. I didn’t dislike her exactly, but she wasn’t any better than the other characters either.

“If after reading this book you come to my home and brutally murder me, I do not blame you.”

The writing definitely took a more unconventional and unique approach to things, with readers getting a close up of how Greg thinks. Greg really spoke to the reader, and this kind of style really stood out to me since a) we don’t get that many books written as such, and b) we don’t get many books written in this style that are done well. There were also parts of the book where there are scenes being depicted as a movie script thing, which I guess was a neat thing to try and also made sense, since Greg made films and all. The writing style was definitely one of the better parts of the novel.

This book is not your average cancer book, but it certainly isn’t anything mind blowing either. I think that’s kind of what my main problem was; there’s nothing special about this book, nothing that really interested me. While I can commend this book for being unique and written very skillfully, and for its little bits of actual humor, when it comes down to it, I didn’t enjoy this book as much as I wish I did. The lack of true purpose really bothered me, since there wasn’t anything else that was keeping my attention. All the characters except Greg lacked depth and Greg himself wasn’t much better. Some may argue the characters are portrayed this way to be realistic, but whether or not this is the case, it doesn’t change the fact that they were not very interesting to me, and mostly became a hindrance to read abut. I did like the writing, it was very different and was interesting to read, but unfortunately that isn’t enough to change the whole reading experience.

Looking at this review, I know it seems really harsh, but I just wanted to emphasize that I’m not trying to bash the author or the book. I’m simply trying to be honest; my final say on this would be it’s a matter of personal preference. Hit or miss, you know? If you’re looking for a unique non-cheesy-romance novel about cancer, then I think this book would be a good fit for you, but otherwise, proceed with caution.

On a completely different note, the movie for this has been released! You can check out the trailer for it below. I haven’t seen it yet, but I definitely hope it will be better than the book.

So tell me: Have you read this book? What did you think of it? Do you agree with anything I’ve said? Do you want to read this book? Feel free to let me know below! I’m honestly very curious as to what other readers have to say about this book.